How is the veto used?

Since December 1991, when the Soviet Union dissolved and the latest change to the membership of the UN Security Council occurred, the veto has been used 59 times to stop 46 draft resolutions.* This is lower than the number of vetoes cast during the early years of the UN and the turbulent Cold War-era during which dominant (veto-)powers were opposing each other.

Since then, the UN in general has matured from a new organization to an (almost) universally accepted institution which has brought tremendous progress in international cooperation, ranging from the Universal Declaration of Human Rights, to the eradication of smallpox, and the millions of people the World Food programme saved from starvation, to mention just a few things.

In contrast, the UN Security Council has not reached its potential. While there were relatively few vetoes in the 90s, the trend has been increasing in recent years (Figure A). With every veto representing an action not taken, the veto is preventing the Council from fulfilling its obligations and as the world is, again, becoming more and more polarized, the number of vetoes in the Security Council is rising as well.

Figur A: Number of vetoes per year

There is much to be said about the patterns and trends in how the veto is used today. Let us begin by examining which permanent members use the veto.

Figure B shows the distribution of vetoes by permanent member. Russia is, with its 27 vetoes, the most veto prone permanent member followed by the US with 17 vetoes and China with 15. While China has vetoed almost as often as the US, it seldomly does so on its own. During the last 20 years, all of China’s vetoes have been cast together with Russia. What about the remaining two permanent members? Neither France nor the United Kingdom have exercised their power to veto a draft resolution since 1989. Since then, both states have expressed a willingness to reform both the veto power and the Security Council. France has gone so far as to request a voluntary restriction of all five permanent members’ veto powers in cases concerning mass atrocities, an initiative that is supported by the UK. This is one step short of the proposition of Stop Illegitimate Vetoes, to limit veto use to direct threats to the veto casting member’s own security or sovereignty. However, both France and the UK have in practice fulfilled our requirements for more than 30 years, we only demand that Russia, China and the United States do the same. 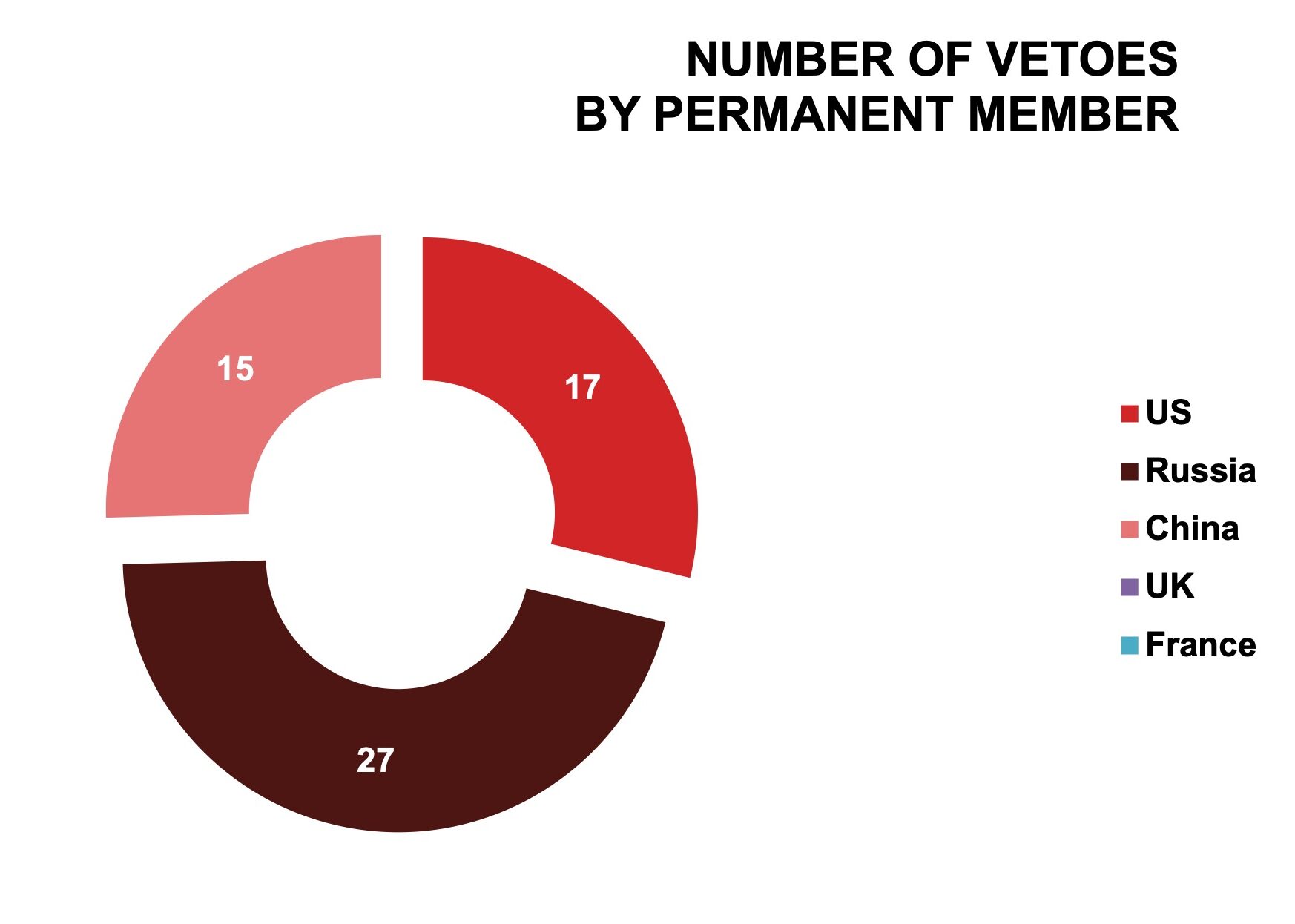 Figure B: Number of vetoes by permanent member

Most vetoes have concerned the Middle East

Vetoes are not distributed equally – there is one region that sticks out among the others. Out of the last 46 vetoed draft resolutions, 32 have been about the Middle East. Of these, 16 have concerned Syria and 15 involved Israel. This may not be surprising, considering the permanent members’ vast political and economic interests in the region. Second on the list is the Balkans and the Mediterranean with six vetoes. The last category “Global” reflects a draft resolution that concerned terrorism in general, without being tied to a specific conflict or country situation. These categories cover all the vetoes, meaning that a region not listed in the chart have been affected by vetoes since the end of the Cold War. This strong geographical bias strongly suggests that vetoes have more to do with national interest of the veto powers rather than with trying to find the best solution for peace and stability. 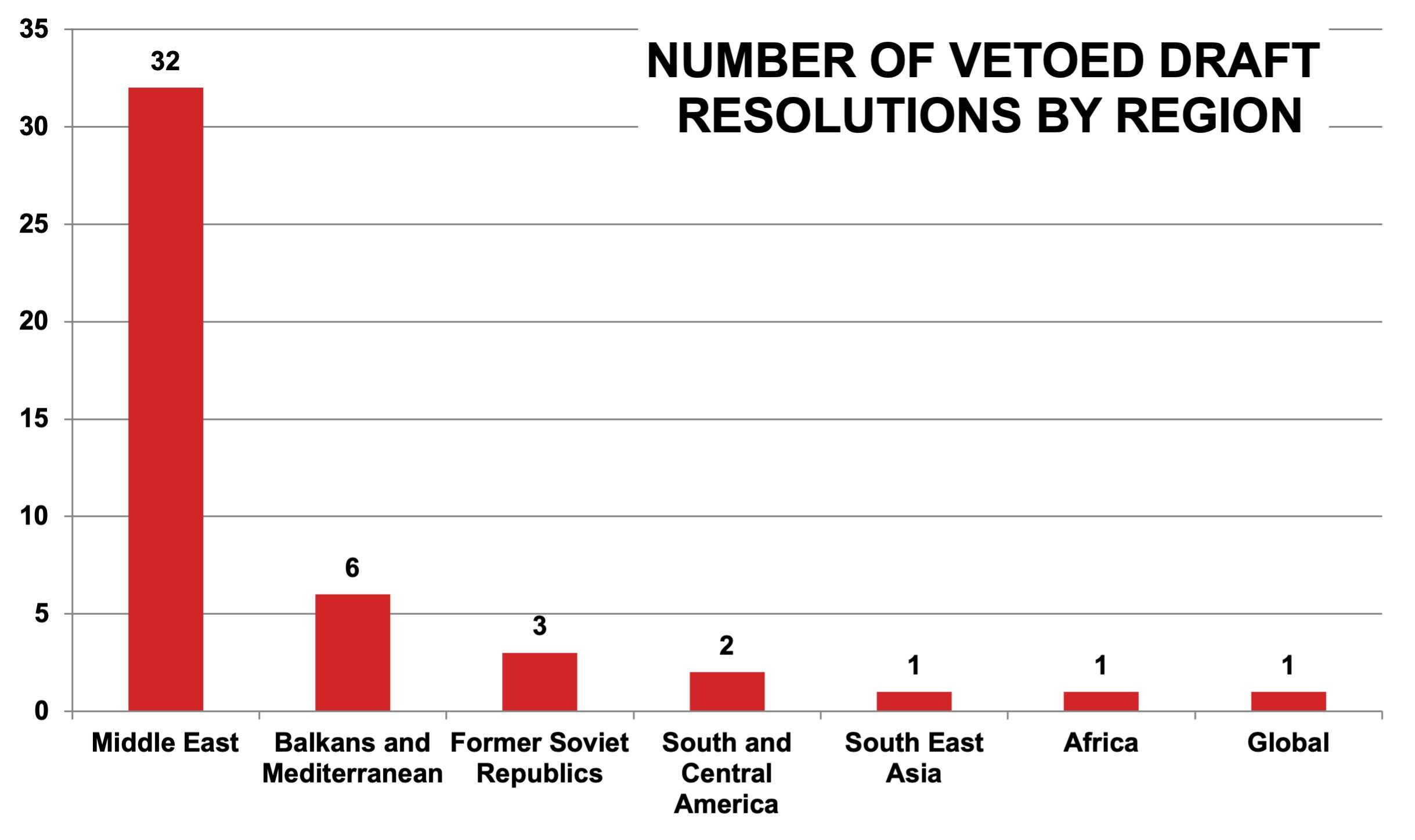 Only two vetoes have not been clearly illegitimate

Almost all of the vetoes since December 1991 fail to live up to this standard. Instead most of them are clearly and expressly motivated by other interests.

There is only one veto which we consider to be legitimate. The draft resolution concerned the United States moving its embassy from Teheran to Jerusalem. While this action was certainly controversial, the United States argued convincingly that the question of their embassy is one of national sovereignty. An additional US veto was coded as uncertain, as it shows some signs of being motivated by legitimate reasons concerning the safety of American citizens, but the permanent member failed to adequately and conclusively justify the veto on those grounds. 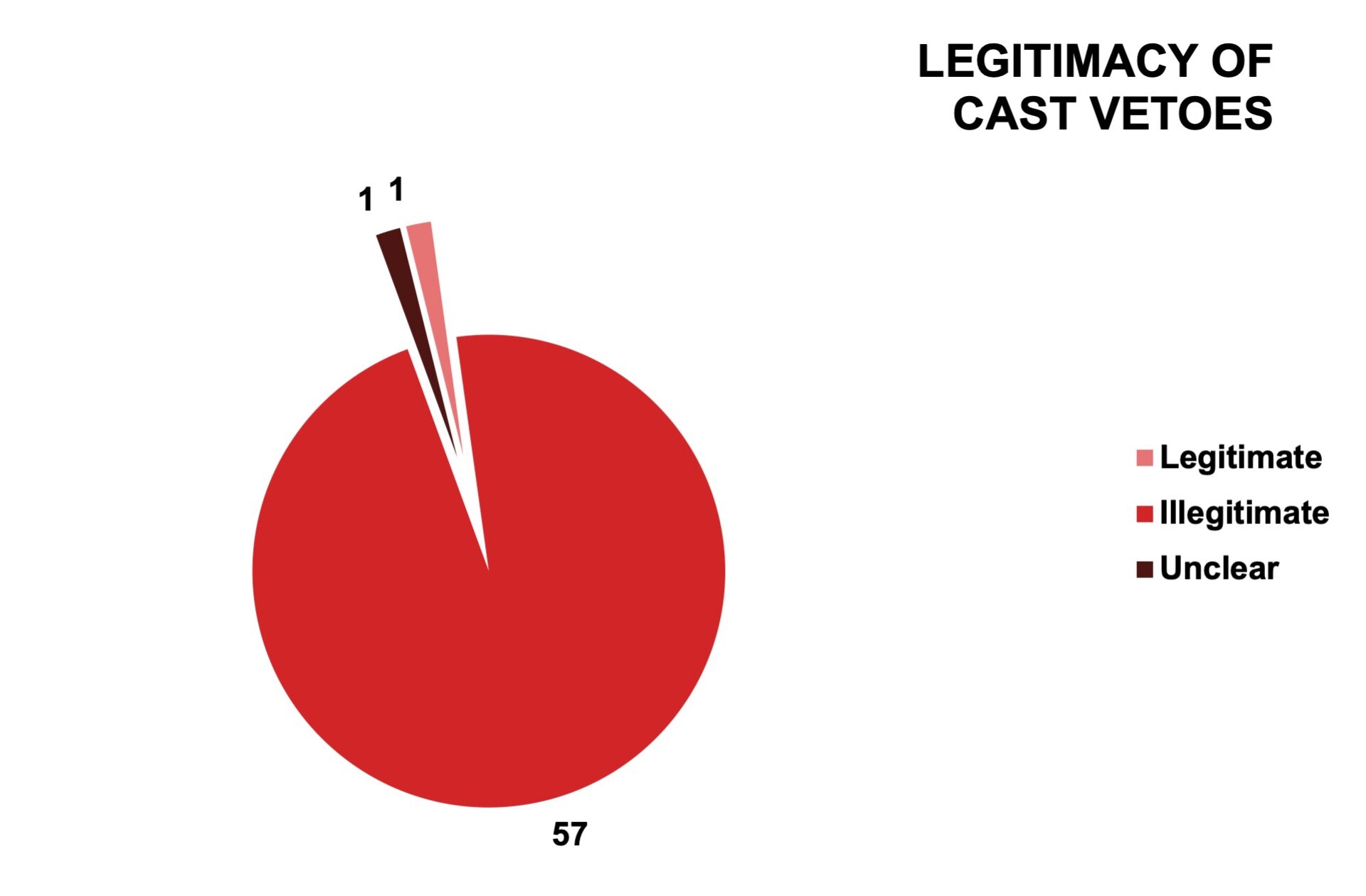 But what is the veto used for then, if not to protect the state that casts it? Depending on the permanent member, there are different motivations.

The United States frequently protects allies from criticism, reprimands, or sanctions. While frequent, the specific reasons given at the Council’s meetings vary. For instance, the US has claimed that some draft resolutions were too intrusive to the peace process between Israel and Palestine, or that a draft resolution failed to take into account atrocities committed by both sides in the same conflict.

China and Russia instead rely on sovereignty. While sovereignty is indeed an important aspect of statehood, their own states have not been the ones at risk. They instead protest against interference by the United Nations in other states, and argue that a state must be left to take care of its own business. However, the United Nations have considerable powers to intervene in member states in order to protect civilians and this duty to protect civilians has been further enshrined with the unanimous adoption of the Responsibility to Protect (R2P) in 2005. In spite of this, sovereignty has been used to justify vetoes as a way of avoiding setting an example of intervention in situations similar to those where Russia and China themselves fail to live up to their humanitarian commitments.

The UN needs to stand up to their
Responsibility to Protect

All three of the permanent members who still use the veto frequently do so for reasons other than their own security and sovereignty. This is a serious problem, not only because it is inherently undemocratic, but it also undermines the mandate of the Security Council and the ability of the United Nations as a whole to fulfill its duty to protect international peace and security. If this practice was stopped, the Security Council would not necessarily produce more resolutions – but better ones and more quickly. We therefore call on the permanent members to commit to restrict their use of the veto, unless when not doing so would demonstrably jeopardize their own state.